I photocopied this article a while ago because it talked about snapshots, but in light of the discussion Rose and I had about Digital Natives, I thought I would post this in response to her blog entry In between analogue and digital: Growing up in the digital revolution (Meyer, 2013), and continue that conversation.

In her blog Rose talked about how growing up between the digital natives and the digital immigrants meant that people of our particular generation negotiate both worlds in a way that neither the previous nor following generation do.  But we do operate under a sort of regret for the things we have lost. I think that accounts for some of the backward looking of the artists of our generation, and why memory has become a hot topic contextually.

I can think of no other time in which the world has changed so rapidly and pervasively in terms of technology.  For those of us who bridge that generation gap we have divided ideals.  We operate technology, love technology, but adore the handmade.  In a world where the digital makes so many things virtual, it is still a comfort to be confronted with something that is tangible.

The above mentioned article talks about a website: Dear Photograph, the premise of which is to take new photograph holding an old snapshot in front of the scene where it was originally taken.  Taylor Jones began the website when he was looking through old photographs with his family, he picked up a photo of his brother as a toddler and realised that his brother was sitting in the exact spot of the original photograph.  A website was born! 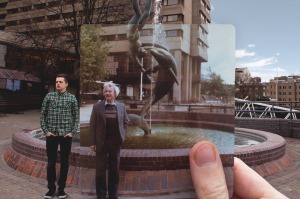 The reason the article initially stood out for me was not so much because of the website idea, but because of the power of the photograph as a memory tool, and as an object.  It’s funny how sometimes a really obvious realisation is not made for the longest time, and then once it clicks you find references to it everywhere.

In my first meeting with Julie Downey we talked about my practice, and I explained to her that I was not a photographer, but had a drawing practice inspired by photography.  I couldn’t quite explain my fascination with family snapshots.  I didn’t want it to get confused with sickly nostalgia or memorial concerns, but I am interested in memory (a subtle divide).   One of the first things Julie said to me was “So you’re interested in the photograph as an object.” Click.

The materiality of snapshots, their papery vulnerability and smooth surfaces, contributes greatly to our experience of them and their impact and power.  Run your finger over one and yet-to-be-understood, sense-memory experience takes hold.  Neurological gates swing open.  Time compresses.  Feelings swell.  Unresolved or loose threads of experience fall into place. (2012, p. 76)

I suppose because for me the virtual world seems insubstantial, temporary… everything moves so quickly that things get left behind, there is a sense that all it would take is a computer packing up or the electricity going down and these things could be lost.  The digital for me represents a loss of control, giving up jurisdiction to someone, something else. Placing trust in the hands of something I don’t completely understand.

But my feelings are quite ambivalent too, by the same token what if something happens to my physical photographs or artworks?  Well then I know that I have digital versions of these recorded and archived on my computer, and on my back-up drive.  For this reason there is something very comforting about having a foot in both these worlds. 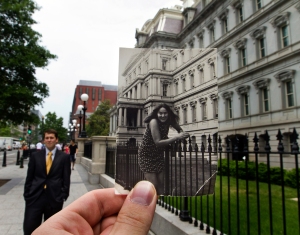 In the same way, websites like Dear Photograph explore the divide between these worlds, in the simple act of taking a digital photograph of a film photograph held in the hand.  In some ways examples like this are a nice metaphor for the kinds of things Rose and I discussed in our conversation.  That recognition of the fact we grew up in a different world to the one we live in now, and being young enough not to reject it completely we still value time in a way that is largely unknown for the current generation.  Where they (generally speaking) enjoy the rewards of things they can get right now, we can appreciate the labour of working towards a result that represents delayed gratification.  This is where the joy in time consuming and detailed drawings comes from.

Photography too was delayed gratification. In contrast to being able to see a wee image on the camera screen, just after taking it (and as a consequence being able to take the photo again and again until you can see that it has worked) the film era required a lot of patience, and (particularly for amateur photographers) a fingers-crossed attitude as you waited for the whole roll to be finished and then waited again while it was developed before you could see the captured image.

Dear Photograph is also part group therapy session, a neutral zone where contributors and site visitors make their peace with all that is going and gone, including the waning materiality of photography itself.  Ironically, as Facebook albums and Flickr accounts flood with digital imagery, the fetishisation of and nostalgia for photographic prints and processes from the past builds.  This phenomenon reflects, perhaps, the nervousness of this transitional moment in visual culture.  In the past decade, we’ve watched the art museums that snubbed “vernacular’ photography reverse course to exhibit vintage snapshots on the verge of extinction. (Heiferman, 2012, p.77)

I think it is clear that Rose and I are not alone in our slightly wistful inclination to hold on to elements of the past. We recognise, perhaps, that the next generation has a completely different perspective and having grown up in a world so intertwined with technology they will never have an understanding of what it was like without its pervasive hold.  We have an appreciation for an odd mixture of time and technology, a combination of elements and a perspective that can now be seen as unique.