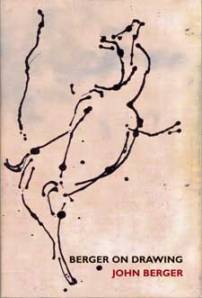 I finished reading Berger on Drawing a little while ago.  I read it cover to cover and savoured every bit, I didn’t want to give it back to the library! (What a quandary for a librarian, eh?). There is something about the way that Berger writes that makes sense to me, it’s an honest and questioning tone, it seems to me as though he is discovering the answers (or uncovering the questions) at the same pace as me, the reader, and therefore doesn’t come across as overly didactic, and avoids being either pretentious or patronising.

The book is a collection of essays and letters on the topic of drawing, examining what it is to draw from a process perspective right through to what it means to draw, and what  drawing as a medium means.

One of the things that interests me is the way Berger talks about how a drawing operates as opposed to a photograph:

I wrote about Berger back in April when I read Another Way of Telling where he made similar points about drawing containing within it the time of its making, therefore capturing time both in the moment depicted but also in the passage of time required to actually produce the work, which is an idea that fascinates me.  Drawing is like slowing time, and sort of extending a moment beyond it’s natural life, because the act of drawing allows for attention to be given unevenly to things of interest within the image.  When I am drawing, I often change my mind about what the point of interest is.  It is one of the reasons I like to draw from a static image, because I will be drawn initially to some aspect or another and that will often change during the process of drawing, so that when I finish often the drawing is not about what I thought it was about at the start.

This prolonged scrutiny of the image changes it or at least changes my understanding of it, and often changes my attraction to it, where once one part was compelling, now another, formerly unnoticed, element takes precedence in my mind.  Berger describes this as an exorcism, which makes so much sense to me.  He talks about how drawings like this are made…

…in order to exorcise a memory which is haunting, in order to take an image once and for all out of the mind and put it on paper. The unbearable image may be sweet, sad, frightening, attractive, cruel.  Each has its own way of being unbearable. (Berger, 2008, p. 49)

Part of what is appealing to me about the labour of drawing is the sense of relief at the end!  I know that might sound quite weird, because there is a lot about the process of drawing that is enjoyable too, it’s just that I understand completely the idea that drawing is kind of like exorcism.  There is so much to hold on to when there is just the idea and the source image, it seems almost like holding my breath, trying to hold the image in my head of how it might look and what it might mean. Then in the making there is so much time in the evolution of the drawing when I don’t know if it is even going to work, but I won’t be able to tell until much more time has been invested.  It is a gamble with time and energy that sometimes pays off. So my understanding of drawing finds resonance in the idea of being haunted; there is an intensity to drawing that is relieved when the pencil can be laid down again, finally.

In a series of letters between Berger and art historian and critic James Elkins, Berger says this:

I like your suggestion that drawing is a ghost subject – exactly for the reasons you give and because, before drawing evolved into a “questioning” of something visibly there, it was a way of addressing the absent, of making the absent appear. (Berger, 2008, p. 109)

Which points out the spectral nature of drawing.  It is not as solid as a photograph, it is a medium that calls up the ghost of something else.  When I am drawing, I have often felt (through the layering of lines and lines) as though I was calling up an image that was already there on the paper somehow, and that the process of layering the pencil marks  is really the process of discovering something that slowly comes into focus.  The graphite gives substance to something that already existed, and the drawing process is just facilitating it being seen.

To draw is to involve what will no longer be there when the drawing is looked at later.  Drawing is about a company which, beyond or outside the drawing, will very quickly or eventually become invisible.  This is why drawings whilst embracing, or trying to embrace, a presence, concern absence. (Berger, 2008, p. 116)

I like the idea of drawing as a tension between presence and absence.  There are so many dichotomies that Berger’s writing calls up for me: presence/absence, remembering/forgetting, stasis/fluctuation, illusion/reality.  For me drawing straddles these divides, it is neither one nor the other, but its own thing… in between.