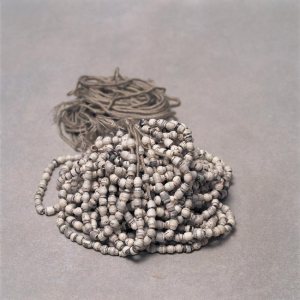 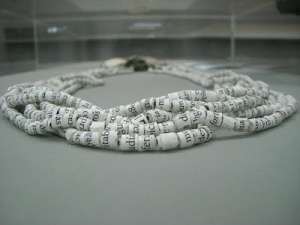 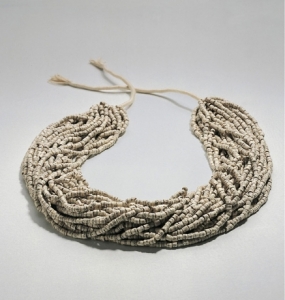 “The very word evisceration says it all, as she and her helpers in this dour dark deed creep into the graveyard of second-hand books with sharp knifes and steal their organs” (Taussig, 2008, p. 106).

Simryn Gill’s Pearls series are strings of beads created from the pages of books.  The artist receives a book, which she then destroys and reconstructs as a string of ‘pearls’ which are then gifted back to the giver, thus completing a transaction.

Taussig, in his essay in Gill’s 2008 monograph, points out that books are sacred, and there is a sense of horror in the idea of willfully desecrating them, and yet with sacrifice comes consecration (p. 106).  The transformation of lines of text into individual pearls represents the idea of language as a commodity.  There is a richness in knowledge (pearls of wisdom), as there is in the tiny beads produced by oysters. Gill has remade and in some ways revalued the books.  None of the content is missing, it is all carefully contained wrapped up in the layering of the paper pearl.  It is no longer accessible, but it is still present.