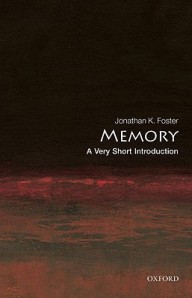 I just finished reading Jonathan Foster’s Memory: A very short introduction which covers a lot of ground for a mere 138 pages.  He looks at how memory works from encoding to storage to recall, as well as forgetting, memory impairment, and improving memory.  Throughout he draws on the studies of scientists and psychologists, and gives a surprisingly thorough overview.

Most pertinent to my interests was the idea that memory is not a reproduction, rather the is a re-construction:

Remembering is not the re-excitation of innumerable fixed, lifeless and fragmentary traces. It is an imaginative reconstruction, or construction, built out of our attitude towards a whole active mass of organised past reactions or experience, and to a little outstanding detail which commonly appears in image or in language form. It is thus hardly ever really exact, even in the most rudimentary cases of rote recapitulation… (Bartlett as cited in Foster, 2009, p. 17)

Memory is a perception, and as such it is not the truth, only a truth. It is filtered through the mind and is subject to interpretation, and not just a single interpretation, throughout their duration memories are reconstructed many times over as new understanding gives way to new perspectives. “The memory that we assemble may contain some actual elements of the past… but – taken as a whole – it is an imperfect re-construction of the past located in the present” (Foster, 2009,  p. 14).  We are all aware on some level that memories are not completely accurate, the cliched example being the varied accounts of an accident when there are numerous witnesses, but even personal memories are reinvented whenever we revisit them.  While reproduction suggests creating the same thing in an identical way, reconstruction implies starting anew to create something that has already been, but has left no trace.

Forgetting on the other hand can be seen not only as the anthesis of memory, but perhaps also as a sometime collaborator in the the process of memory.  There is a suggestion that forgetting occurs in order to make way for the storage of newer, more important, memories:

There are two traditional views of forgetting. One view argues that memory simply fades or decays away, just as objects in the physical environment might fade or or erode or tarnish over time. This view represents a more passive conceptulisation of forgetting and memory. The second view regards forgetting as a more active process. According to this perspective, there is no strong evidence for the passive fading of information in memory, but forgetting occurs because memory traces are disrupted, obscured or overlaid by other memories. In other words, forgetting occurs as a consequence of interference. (Foster, 2009, p. 62)

Forgetting and subsequent remembering concerns our access to the way the memory is stored, whether it is in the short term memory (or consciousness) or long term memory.  It can occur that a memory we are not actively aware of can be prompted by a trigger of some kind.  So often when we say “I forgot” it is this kind of forgetting we are talking about, and the phrase “I forgot” actually means “I forgot, but I remember now.”  Much more disconcerting is the knowledge that there are many many things which we seemingly have forever lost.  Although proving this kind of forgetting is much more difficult: “The existence of forgetting has never been proved: we only know that some things don’t come to mind when we want them to” (Nietzsche as cited in Foster, 2009, p. 62).  Anecdotal evidence suggests that forgetting is actually a relief, as Foster explains in his recount of the study of a man with a near perfect memory (likely related to his synaesthesia) who discovered after some time that he couldn’t bear to have conversations anymore because of the overwhelming wealth of associations he got from this simple interaction (p. 133).  People have a tendency to remember the things that are important to them, and let go of details that are not useful or interesting.  It is true that sometimes we lose details we would rather have kept clear, but as an alternative, a perfect memory is not necessarily a blessing.