In 2009, on a brief trip to London I visited the Science Museum where two things made a lasting impression on me: Charles Babbage’s brain (or half of it), and a pantograph.

Charles Babbage (1791 – 1871) is largely credited as being the father of computers, due to his invention of the Difference Engine, which was basically an enormous mechanical calculator, and the Analytical Engine, which was a more refined machine that was programmable. He never actually completed a machine, but subsequent engines built from his plans, using technology that would have been available to him were made and work! (Science Museum, 2014). When Babbage died his brain was removed in an attempt to sate Victorian curiosity about what made him so smart, and half of it sits in a jar in the Science museum. It was my first encounter with a preserved brain.

Also on display at that time was a Pantograph, and it fascinated me with its ingenious simplicity. Struck with enthusiasm I was determined to come home and make my own, but as it happened it got stored for later in my own brain and largely forgotten. It was only recently through a deeper research into drawing and reproduction that I got to thinking of drawing machines and I revisited the pantograph idea.

Through my research into the pantograph I discovered references to The Turk, a chess-playing automaton invented in 1770 by Wolfgang Von Kempelen (1734 – 1804), because part of the armature of the automaton uses the scissoring mechanism of a pantograph (Buchanan, 2013, p. 21).

Built to impress Empress Maria Theresa of Austria, this mechanical player was a source of fascination for over 80 years before it was destroyed in a fire in 1854. During that time many people tried to discover how it worked, most concluding that there had to be a human chess player cunningly concealed within. The Turk famously bested Benjamin Franklin, Catherine the Great, and Napoleon Bonaparte -when he tried to cheat, the automaton responded by sweeping the pieces off the board (Standage, 2004).

Charles Babbage played it twice, and though he was positive it was a hoax, the Turk inspired him to work on his computing machines, convinced that a machine capable of calculating could, in fact, be done (Standage, 2004).

One of the tricks the Turk performed was the Knight’s tour, a mathematical problem in which the knight (moving in its characteristic diagonal moves) must travel to every square on the chessboard just once. It turns out that there are endless solutions to this problem (although it is difficult), however there are a limited number in which the tour ends in a way that a final move would place it on the square on which it began, a ‘closed’ tour, and this is the performance the Turk was known for.

Currently on my reading list is Georges Perec’s Life a Users Manual, which I was delighted to discover follows the format of a Knight’s tour (Gidley, 2000). Using the tour as a literary device, Perec builds the story by investigating, chapter-by-chapter, the rooms of characters living in an apartment building – a ten by ten block. 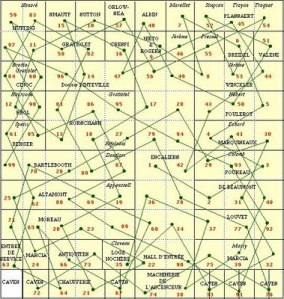 When I was growing up my dad was always trying to teach one of us to play chess. Arguably the most patient of our pack, he must have torn his hair out to discover that I had no interest in learning what seemed like endless rules. I remember he had an electronic chessboard that was designed so you could play chess alone. What a melancholy thought! I could just barely remember what it looked like, but with a little research and the help of two siblings I discovered it was called the Chess Challenger 7.

I want to call it the Turk of its day (1970s rather than 1770s), but that’s problematic of course, as it owes more to Charles Babbage than it does to Baron Von Kempelen, being more about technology and less about misdirection and illusionism. Writer Arthur C. Clarke said, “Any sufficiently advanced technology is indistinguishable from magic” (Clark as cited by Arthur C. Clarke Foundation, 2014). A chess playing machine from the 70s is very old hat when you consider the technology of, say, a smart phone, and yet, I couldn’t even build you a chess machine, let alone tell you how a smart phone actually works on a technological level. So despite the fact we take these things for granted a little, particularly now that chess games like this are obsolete, they really do represent magic to people like me.  Even though the Turk was just an elaborate disguise for an uncomfortable chess master, the mechanics of the hoax seem far more magical to the modern eye than the electronics of the Chess Challenger 7… in fact I find my memory wants to make it more magical than it was: “I can’t remember, did it talk?” I asked my sister.  In retrospect we’re fairly certain it didn’t, but somehow I can almost hear it say “Check Mate!” in robotic tones.

The Chess Challenger 7: was it possible Mum still had it tucked away in storage? When I asked, my mum was confident it was long gone, probably to a school fair, but as a consolation she offered me a smart leather folder belonging to my dad that housed a note pad and a calculator.

I’ve been thinking a lot about truth and fiction, hoaxes, copies and substitutes, and the serendipitous connections that link this to that. With all that in mind it seems fitting that I should go home to find the Chess Challenger 7 and come back with Dad’s old calculator.