I often find, quite by accident, a book in the library that I haven’t seen before. Despite its smallness, there are still unexpected treasures to be found among the stacks.

I picked up Christina’s World because I’ve always liked the painting of the same name, but don’t know much else about the painter Andrew Wyeth.

This book is not at all what I expected, written by Wyeth’s wife, Betsy James Wyeth, it tells the story not of the artist, or so much his paintings, but of the subject, Christina, and her world that inspired Wyeth. 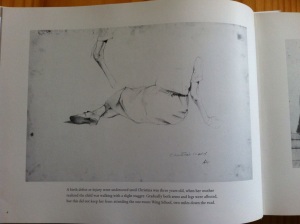 I’d always seen the figure in the painting as girlish, a teenager perhaps. Her position is curious, out in a field looking back at a house on the hill. Something about the tension in her skinny arms and torso, versus the stillness of her feet suggests her disability.

I was astonished to discover that Christina would have been 55 years old when this was painted in 1948.

The book tells Christina’s incredible story from childhood to death, through the perspective of Betsy Wyeth (who met the adult Christina when she was ten), cobbled together from her own experience of Christina, the stories told to her by Christina during her lifetime, or recalled by childhood friends later on, as well as letters that reveal Christina’s own voice.

Limited geographically by her inability to walk, Christina’s world was a small one one, made rich by the impression she left on those around her. She certainly inspired devotion in her younger brother Alvaro, who was her life long companion.

This world she lived in provided seemingly endless inspiration to Wyeth whose paintings and drawings fill the book and create echoes of Christina’s story.

It’s perplexingly difficult to catagorise this book as it isn’t really a biography of Christina, nor is it a monograph of Wyeth’s work, but something between the two, and all the more intriguing for it.

Christina’s life story and her relationships with (in particular) her brother, the house, and the landscape give a chokingly emotional backstory to the dark, earthy paintings and haunting drawings. With author, Betsy Wyeth, being wife to the artist and friend to the subject, I’ve not seen a book put together in quite this way before.